Bracknell Forest Council has become the latest local authority to adopt the International Holocaust Remembrance Alliance (IHRA) working definition of antisemitism. This comes as part of its commitment to eradicating all forms of discrimination.

At a full council meeting held last week, councillors unanimously agreed they would support the adoption of the definition, whilst also recognising that the council stood against discrimination, prejudice and hatred directed towards all communities in the borough.

The IHRA working definition of antisemitism is just one part of the council’s ongoing commitment to stamp out racism locally and encourage the greatest community cohesion in Bracknell Forest. The definition states:

“Antisemitism is a certain perception of Jews, which may be expressed as hatred toward Jews. Rhetorical and physical manifestations of antisemitism are directed toward Jewish or non-Jewish individuals and/or their property, toward Jewish community institutions and religious facilities.”

The Alliance is made up of 34 countries, including the US and Germany. It unites governments to promote and strengthen Holocaust education and research. The UK plays a leading role in the IHRA as it works to combat Holocaust denial, along with championing the IHRA definition of antisemitism.

Through work on equality, diversity and inclusion, the council is committed to eradicating all forms of discrimination. Adopting the IHRA definition on antisemitism is one important element in a much wider programme of work to do this.

“We want to do all that we can to lead by example and show our commitment to ensuring everyone in our borough is treated with the respect they deserve.

“Hatred of any kind, including antisemitism or discrimination against people for their beliefs, has no place in our communities.” 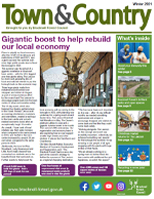