Ganesh Chaturthi, also called Vinayaka Chaturthi in Hinduism is a 10 day festival marking the birth of the elephant-headed deity Ganesha, the god of prosperity and wisdom. It begins on the fourth day (chaturthi) of the sixth month of the Hindu calendar, also known as Bhadrapada.

At the start of the festival, idols of Ganesha are placed on raised platforms in homes or in elaborately decorated outdoor tents. The worship begins with the pranapratishtha, a ritual to invoke life in the idols. This is followed by shhodashopachara, or the 16 ways of paying tribute. Amid the chanting of Vedic hymns from religious texts like the Ganesh Upanishad, the idols are anointed with red sandalwood paste and yellow and red flowers. Ganesha is also offered coconut, jaggery, and 21 modaks (sweet dumplings). The dumplings are considered to be Ganesha’s favourite food.

At the end of the festival, the idols are carried to local rivers in huge processions accompanied by drumbeats and dancing. There they are immersed, a ritual symbolising Ganesha’s homeward journey to Mount Kailas, the home of his parents, Shiva and Parvati.

Ganesh Chaturthi assumed the nature of a public celebration when the Maratha ruler Shivaji (c. 1630 to 1680) used it to encourage nationalist sentiment among his subjects, who were fighting the Mughals. In 1893, when the British banned political assemblies, the Indian nationalist leader Bal Gangadhar Tilak revised the festival. Today the festival is celebrated in Hindu communities worldwide.

To everyone celebrating across Bracknell Forest today, happy Ganesh Chaturthi. 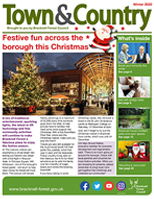