His Present Majesty: proclamation reading by the Mayor of the Borough of Bracknell Forest

The official announcement of the new King, known formally as the proclamation of His Present Majesty, will be read by the Mayor of the Borough of Bracknell Forest, Cllr Ankur Shiv Bhandari, in Bond Square, at 2pm on Sunday 11 September.

Members of the public are invited to attend the reading.

The Mayor will be accompanied by the Leader of Bracknell Forest Council, Cllr Paul Bettison OBE and the Chief Executive, Timothy Wheadon.

Invited guests include elected members of the council, freemen of the borough, honorary aldermen, past mayors, the mayor’s chaplain, the coroner, the honorary recorder, borough police and fire commanders, deputy lieutenant, parish and town mayors and their clerks.

The national proclamation will be read on Saturday 10 September.

National arrangements and an online book of condolence can be found on the Royal Household website.

Members of the public may also sign our book of condolence in Princess Square between 9am to 4:30pm.  We kindly request that residents give each other space when waiting. 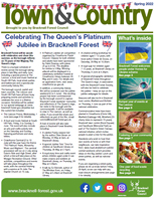